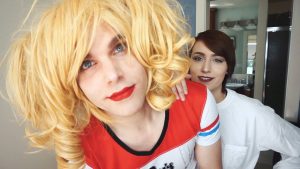 Jack felt like he was on fire, the anticipation thrumming through his body reaching a fever pitch as his usually demure girlfriend ran her gloved fingers all over his body, examining her prize. It had started as an innocent night when she had brought home the joke gift from Betsy’s bachelorette party- a leather strap on harness and the attached giant black dildo. Charlotte had laughed at Jack’s wide eyed look, telling him he had better watch out later! But after a few drinks of their own, Jack found himself confessing his sissy fantasies to her, begging her to indulge his secret strap on fetish and don the massive cock. She loved how it made her feel, powerful and sexy, and found herself telling Jack to drop to his knees and worship her new toy. He found himself confessing to her yet again, wishing he was all dressed up like a panty slut for her… Charlotte grinned and led him on his knees to her closet, loving taking complete control of her new sissy slut.

Click HERE to talk to a phone sex mommy