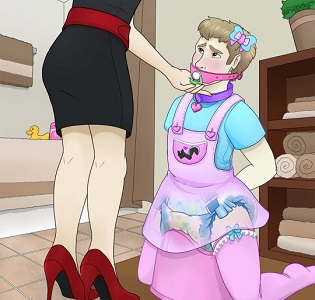 Bobby blushed when Mommy Liz gave him a patronizing pat on the head when she came over to check on him, asking him if he’d finally stopped being a stubborn baby and pooped in his diapers. He squirmed a little bit, the rim of the pink training potty pressing against him even through the diaper and the poopy mess that he had made in it and tried to be still before she noticed.  She just smirked at him, and he knew then that he wasn’t hiding anything from her.  She could probably smell him on the other side of the room! He couldn’t talk around the pacifier gag that she had buckled around his head, but all he had to do was nod yes and he knew that she would let him get up so she could lay him down on the changing pad to get him out of his stinking mess of a diaper. Click right here for the second part and call for a little dommy mommy phonesex.